The 86 Greatest Shower Thoughts Of All Time “This might be a stupid idea, but…”.  Stop it.  The best ideas stem from nonsense and aha! 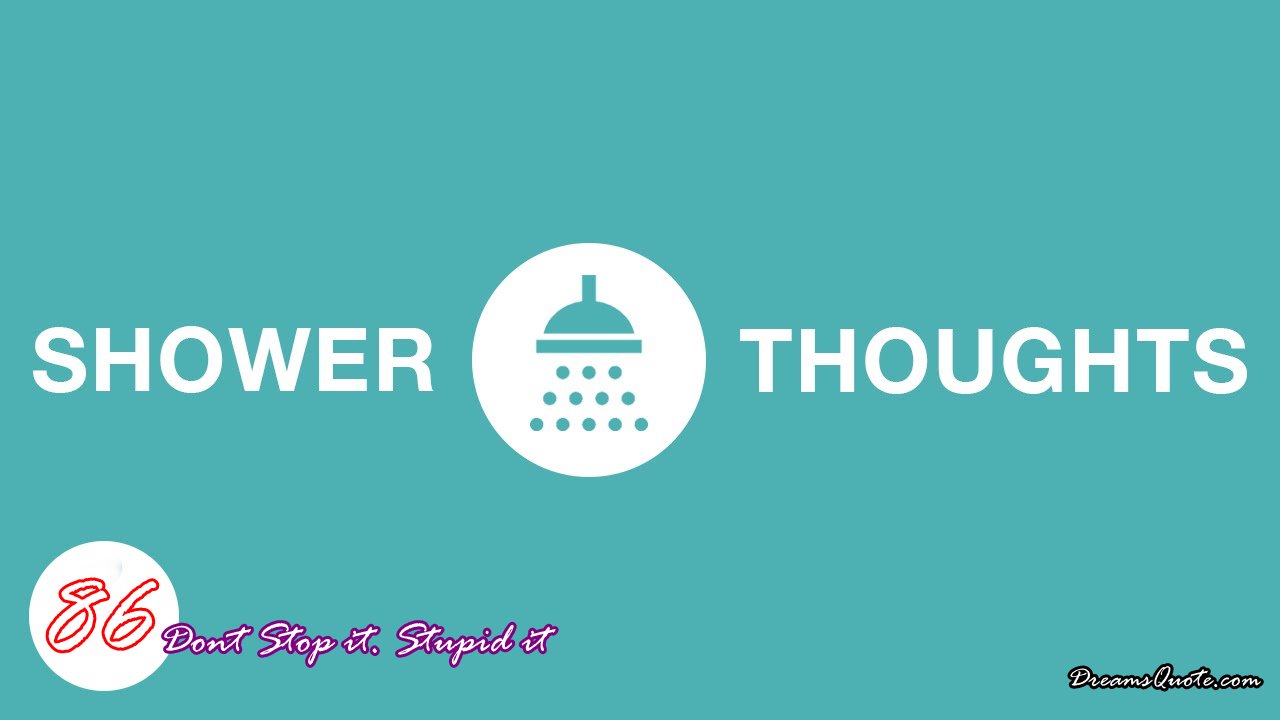 1. If EA suffers big enough losses from the backlash of Battlefront 2, and it all started because some guy couldn’t unlock Vader, this will be the second time Anakin brought balance to something.

2. Anxiety is like when video game combat music is playing but you can’t find any enemies.

3. Somebody at google was just like “yea, just have someone drive down every road on fucking earth”.

5. It kinda makes sense that the target audience for fidget spinners lost interest in them so quickly

6. Being 35 and not wanting to work in the field for which you’ve prepared is like being half way through an RPG and realizing you’ve built out your skill tree all wrong and you can’t respec and you can’t make a new character and there will never be another video game again.

7. Security at every level of an airport is absolutely ridiculous. Until you get to the baggage claim. Then it’s just like take whatever bag you want.

8. My parents used to say there would be people offering drugs to me for free until I got addicted to them and then would charge exorbitant prices for it. Looking at the games in the app stores nowadays, I think those drug dealers all turned into game developers. 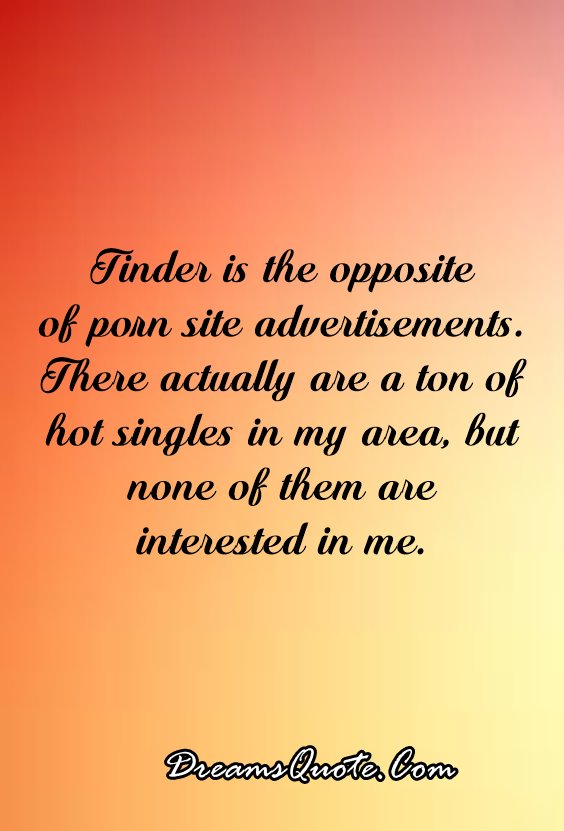 10. It must suck to be an air conditioner repairman. You spend your day working in buildings that have no air conditioning. When it’s fixed and finally cool, you leave.

11. It’s 2017, any place that charges a convenience fee to pay bills online is just an asshole.

12. I’m not a millennial, but if I was I’d be damn tired of another article every other day with a new theory about who millennials are and what they want.

13. I wish you could just record silence and then play it on loudspeakers on full blast to make the whole room quiet.

14. When medication says “do not operate heavy machinery” they’re probably mainly referring to cars, but my mind always goes to forklift.

16. If I had a son or daughter come out and tell me they’re gay, I’d only respond with “I know”. This way, if it’s a prank, they just got pranked back. If they’re serious, I look like an understanding parent. Win-win.

17. Maybe little kids have it right when they worship the garbage man, the postman, the guy who drives the semi and cranes, instead of admiring the cesspool of Hollywood that we adults seem to.

19. “Bob’s Burgers” would also be an appropriate title for SpongeBob SquarePants. the best Shower Thoughts Of All Time

20. The other day, someone said, “Newton’s rolling over in his grave” in response to a basic physics mistake. But if Newton heard someone suggest his corpse could move without an external force acting upon it, he would roll over in his grave.

21. At some point I worry that self driving cars will go a route just to ensure you see certain stores or billboards, the real world equivalent of a pop up ad.

22. Quitting cable news is like quitting smoking. After a year without you see how disgusting it really is.

23. One of the worst feelings is the feeling of your sleeves sliding down you wrists as you wash your hands.

24. The first time someone steals a spaceship and flies away is going to be epic.

25. Referring to your employees as “family” is the corporate equivalent to telling a prostitute you love her.

26. Dogs are like having children on easy mode. They will eat literally anything, shit outside, and won’t ever go to college. And they think you’re the greatest thing in the world just because you are there.

27. There shouldn’t be a stigma about going to the movies alone. The activity where you can’t talk to someone should be the one you can do alone. 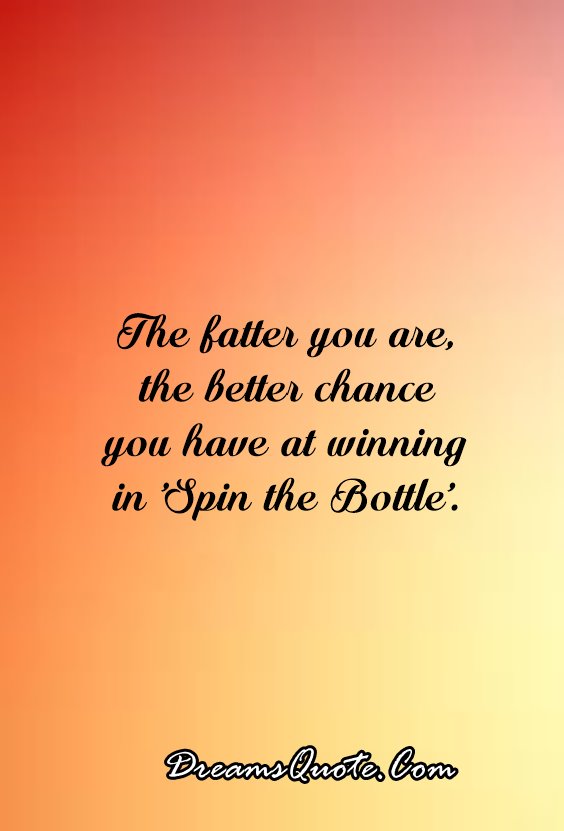 28. The fatter you are, the better chance you have at winning in ‘Spin the Bottle’.

29. Google should make it so that looking up “Is Santa real?” With safe search on only gives yes answers.

31. As a loyal customer, I feel really ripped off when companies have a promotion for new customers but offer nothing for customers who have been with them for years.

33. There’s probably some women out there whose children secretly belong to the wrong man and are freaking out about the fact that people are taking DNA tests for fun.

34. My parents taught me to be kind and humble, honest and hardworking, and to save an unnecessary fuckton of plastic bags under the sink.

35. If Apple manufactured clothing they’d probably have all the belt loops on their jeans a different size than normal, so you’d also have to buy an Apple Belt.

36. If I see Google in a show/movie I think nothing of it, but if I see Bing, I know it’s product placement.

37. If penis size was as obvious as breast size the world would be a very different place.

38. Airports should have small movie theaters for layovers. They would make a killing.

40. I’m lucky to be broke at a time when minimalism and sustainability are in style.

43. When I have kids I’ll understand that they can’t pause an online game.

45. The only part of your reflection you can lick is your tongue.

46. The Onion might go bankrupt because they can’t compete against the reality now.

47. When you introduce two different groups of friends to each other, it’s like your own life’s crossover episode.

48. Waterboarding at Guantanamo Bay sounds super rad if you don’t know what either of those things are.

50. It’s weird to think that nighttime is the natural state of the universe, and that daytime is only caused by a nearby, radiating ball of flame.

51. Military surplus stores make you buy equipment that you already paid for.

53. Batman has been ‘ridding Gotham of crime for decades now and it’s still full of criminals. He’s doing a really bad job.

54. Somewhere out there, there’s a little old lady wearing a “wake n’ bake” shirt, but only because she likes baking in the morning.

56. Keanu Reeves and Terry Crews should make a movie together because not only are they the nicest guys in Show Business, but they’re also the most badass characters in everything they star in.

58. Websites should tell you what their password requirements are on the login screen so you can remember which version of your password you used.

59. You never realize how little shampoo you really need until the bottle is about empty.

60. If you spend 10 mins taking a shit at work everyday, by the end of the year, you’ll have earned an entire weeks worth of pay by doing nothing but shit on the company’s dime.

61. Do bra’s have cupsizes because boobs have milk in them?. good Shower Thoughts Of All Time

63. An underrated perk of being an adult is you no longer outgrow your clothes.

64. By always blaming Millenials, we are showing that our generation (which raised them) doesn’t take responsibility for our problems.

65. “Based on a true story” movies are all part of the same series.

66. There should be a millenial edition of Monopoly where you just walk round the board paying rent, never able to buy anything.

67. There should be a reality show where flat-earthers have to find the edge of the world.

68. Soon games will advertise “No DLC/Microtransactions” just like food advertises “No trans fats”.

69. As a graphic designer, my entire career exists because I was able to pirate Photoshop 10 years ago.

70. This is not the year for mistletoe in the workplace.

71. Shrek may unintentionally have the most realistic message of all animated films in that, “regardless of inner beauty, people will probably end up with someone who matches them outwardly.”

72. Baby gates are the exact equivalent to – This area is locked until you’ve gained more experience.

73. Honey is totally underrated. Its the only natural food that’s made without destroying any kind of life. It’s also the only food that won’t rot.

74. Earth is a dinosaur planet, and humans are just mutants left over after the apocalypse.

75. Most of the trash on the streets is from junk food because people that don’t care about their own health aren’t going to care about the health of the planet.

77. The laws that we are supposed to be fully aware of and abide by are so complex that there is an entire profession dedicated to understanding them. One that takes 8 years to master.

79 In 20 years or so, I’m going to have to jailbreak my car to drive above the speed limit.

80. Me at 8 years old: “When I grow up no one will tell me when I have to go to bed.” Me at 33 years old: “Ooo, there’s an app that will analyze my sleep quality and patterns and alert me when my optimal bedtime is approaching.”

81. Fitbits are just like Tamagotchis, except the stupid little creature you have to keep alive is yourself.

82. Being “Jr.” or “the Second” is the real life equivalent of having to put numbers after a username.

83. I hate to spend $6.50 on six pieces of raw chicken, but dont hesitate to spend $5 on one chicken sandwich.

84. Sleep should be rolled over. Like “Oh, you got 20 hours of sleep today? Cool man, you don’t need sleep for the next three days.”

85. If millenials aren’t getting married, eventually they will be blamed for destroying the divorce lawyer market.

86. Bill Gates is like a video game character who’s unlocked everything. All he can do now is self-imposed challenges like cure malaria to keep things interesting. Greatest Shower Thoughts Of All Time